Home
Other
General Hospitals in Lagos & Their Locations

Below is a list of the general hospitals in Lagos State providing health care services to the over 20 million residents of the state.

Alimosho General Hospital was set up with the vision of providing excellent health care service to its patients which is comparable to the standard of the World Health Organization (WHO).

The hospital is one of the 26 secondary health institutions under the Lagos State Health Service Commission.

Alimosho GH as it is popularly called is known to providing accessible health care opportunity under highly skilled personnel at affordable charges.

The Ikorodu General Hospital was established in 1983 to provide healthcare services to the people of Ikorodu and it’s environs.

The hospital is quite affordable and patient-friendly providing free medical service for all emergencies for the first 24 hours. Also the general hospital uses an efficient ambulance operation and also offers free medical care for the destitute and physically challenged, children below 12 years and adults above 60 years.

Located on Broad Street in Odan, Lagos Nigeria, the   Lagos General Hospital is the oldest general hospital in the state

Initially, it was established in 1893 as a military hospital to take care of members of the British Armed forces that were ill during the colonial days.

Located on 1-5 Oba Akinjobi Road, Ikeja, LASUTH as it is popularly called was established on the 25th of June, 1955 by the old Western Regional government to provide health care services for the people of Ikeja and its environment.

LASUTH was set up with the vision of becoming a world class teaching hospital that uses cutting edge technology and highly developed human resources to render excellent medical care/services to the people of Lagos State.

The hospital provides free healthcare to all citizens with the diagnosis of Malaria, children below the age of 12 years and adults 60 years of age and above.

Located on 3 Old Ota Road, Orile Agege, Lagos, this general hospital was established in 1982 as a health care centre under the control of Agege Local Government. It was later upgraded to the status of General Hospital in 1999 under the Military Administration of Col. M.B Marwa with the objective of providing secondary level healthcare services to the people of Agege/Alimosho/Abule-Egba/Ipaja/Ayobo/Command/Ota/Idiroko and other neighboring towns and villages.

Also, it serves as the annex for Lagos State University Teaching Hospital and the hospital is said to receive an average of 800 patients every day.

In 2017, the hospital was embroiled in controversy when it was reported that two of its medical doctors, Morenike Olaniyi and Abidoye Gbadegesin were alleged to have killed a pregnant woman due to negligence on their part while delivering the said woman of her of a baby.

Located on 48 Olayide, Mushin, Lagos, the General Hospital Mushin is a popular hospital in the Mushin area of Lagos. The hospital is known to have modern facilities used in diagnosing and treating general medical cases and series of specialty treatment.

The hospital was established with the objective of providing premium health care services to the people of Surulere and its environs in all areas of health; medical, child and maternal health, nursing care,surgical, dental care, heart to heart clinic, Dot/Chest clinic, Eye clinic, pharmaceuticals, diagnostics and rehabilitative health care.

Founded in 1960, Island Maternity as it is popularly called is well known for its important role in caring for expectant mothers in Lagos.

Although, it is not a general hospital, Island Maternity is certainly worthy of mention in this post. The hospital has been nicknamed the largest baby factory in the country with over 300 baby deliveries every month. Interestingly, the former governor of Lagos State, Babatunde Fashola was born in this hospital

The centre is a standalone maternity hospital with over 200 bed space. The hospital attends promptly to emergency obstretic cases and patients are not mandated to provide initial deposit prior to treatment.

The Island Maternity is located on Campbell Street, Lagos Island. 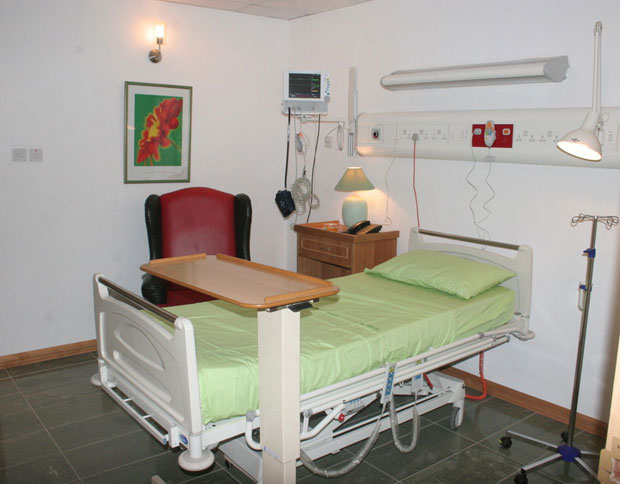